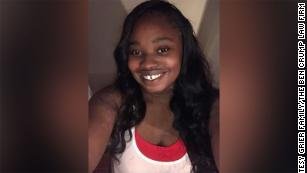 (CNN)Weeks after a Georgia woman fell from a police car while in police custody and later died, an autopsy commissioned by her family says her cause of death is consistent with severe blunt force trauma.Speaking on Monday with attorney Benjamin Crump, Dr. Allecia Wilson, the director of autopsy and forensic Services at the University of Michigan, said Brianna Grier suffered from two fractures, both on the left side of the head, along with several hemorrhages, severe cerebral edema, and compression of brain structure.

For those who may not have context, there is a common tactic of hands-free abuse by police some call “paddywagon popcorn”. It’s when police will restrain someone so they can’t move their arms, but then fail to secure them to the vehicle. They then drive in a way that assures the person, unable to balance themselves, will be injured banging against the sides and floor, or falling out of the vehicle while moving or shortly after it is opened.